Peru is an exciting place for the world of e-commerce. Although it is not a large country, it has 33 million inhabitants and 47% of these are underbanked, so there is still plenty of room to grow.

We will discuss this and much more today in this new installment with Americas Market Intelligence (AMI).

For the vast majority of markets, the pandemic was a catalyst for change. This was especially noticeable in Peru, where Covid-19 unleashed a latent and massive demand for e-commerce, digital banking, and cryptocurrencies. In 2020, the total volume of Peruvian e-commerce grew by 55%.

This growth has been maintained: it is expected that by 2022 electronic commerce in that country will increase 53%, reaching a value of US $20 bn and that the number of virtual wallet users will increase by 57%.

The latter has gained much strength in Peru. The Yape digital wallet, from Banco de Credito de Peru, was launched in 2017 and by 2021 it already had 8 million users, more than half of the country’s banked population. The Plin wallet, belonging to a consortium made up of other leading banks in the country, also takes a significant percentage, which places the penetration of wallets almost at the same level as bank penetration.

Since 2018, the Peruvian government has been promoting digitization. That year, they launched the Gob.pe platform, which unifies and digitizes government services. Today, it hosts almost 7,000 digital guide services for the inhabitants of that country. Also since 2018, the country has implemented a competitiveness and productivity law that aims to promote the digitalization of ministries and government agencies.

As in other countries in the region, the pandemic helped make the need for greater government digitization urgent, especially for the 47% of the population that is underbanked in Peru. In 2020, the Yanapay subsidy was launched, a special benefit paid to low-income families through banks and different digital wallets, including Yape, Tunki, and Bim.

In this way, the use of digital platforms is promoted and citizens who are not banked are financially included. By 2025, the total volume of Peruvian e-commerce will be expected to consolidate and reach US $28 million. 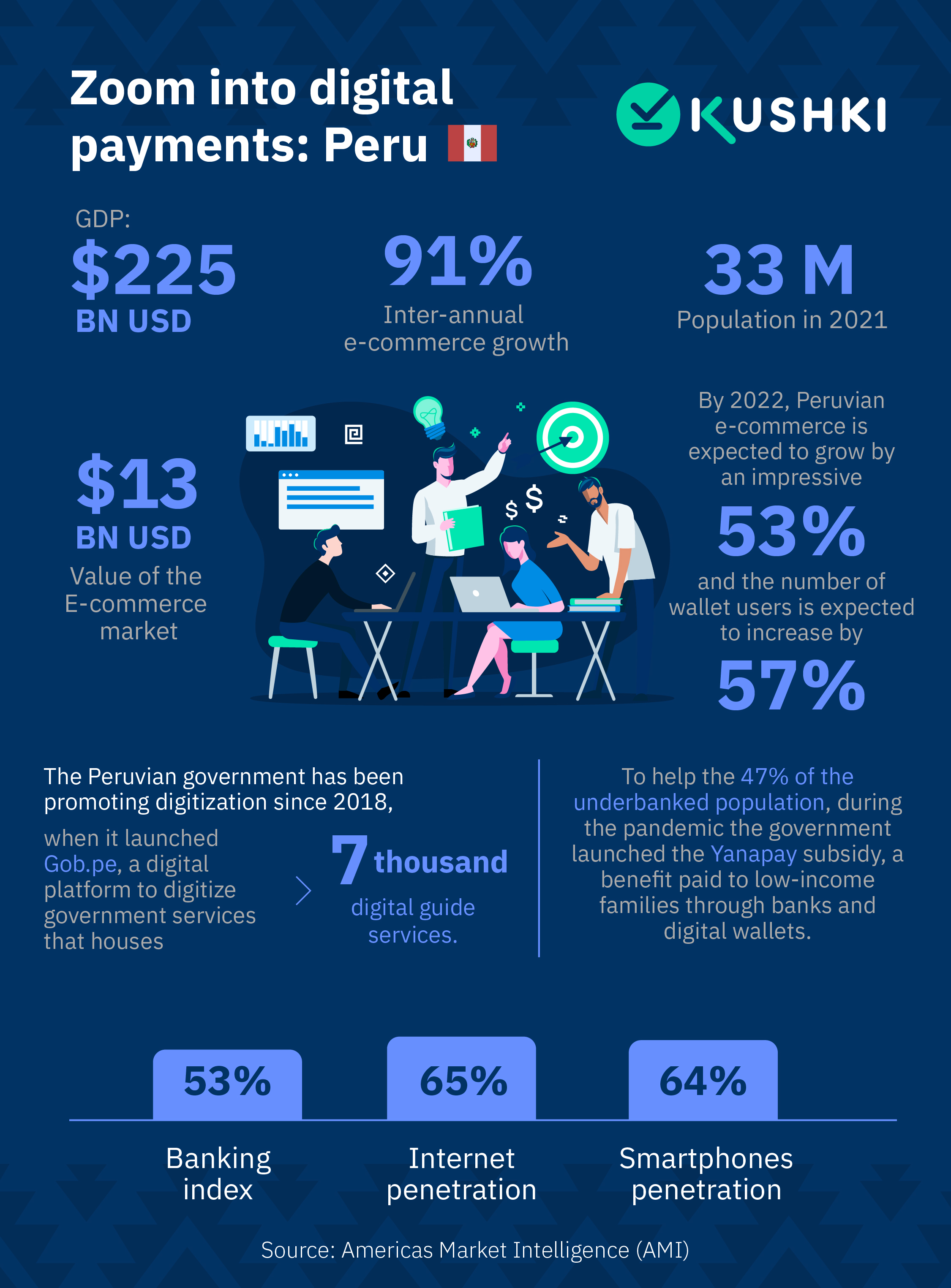 Let's find together the payment solution you need.

Colombia has positioned itself as a hotbed of fintech innovation in recent years. Do you want to know why? We will talk about the reasons…

Ecuador and its digital ecosystem: what opportunities exist?

Together with Americas Market Intelligence (AMI) we come to talk about Ecuador. A medium-sized country, but dollarized and with a highly…

Kushki and AMI give us zoom on digital payments: Mexico

Latin America is a very multicultural region. Each country is a world, with very different customs among them. Purchasing habits and means…

Kushki and AMI give us a zoom on digital payments: Chile

At Kushki we connect Latin America with payments, but we believe that this cannot be achieved without an understanding of the very…